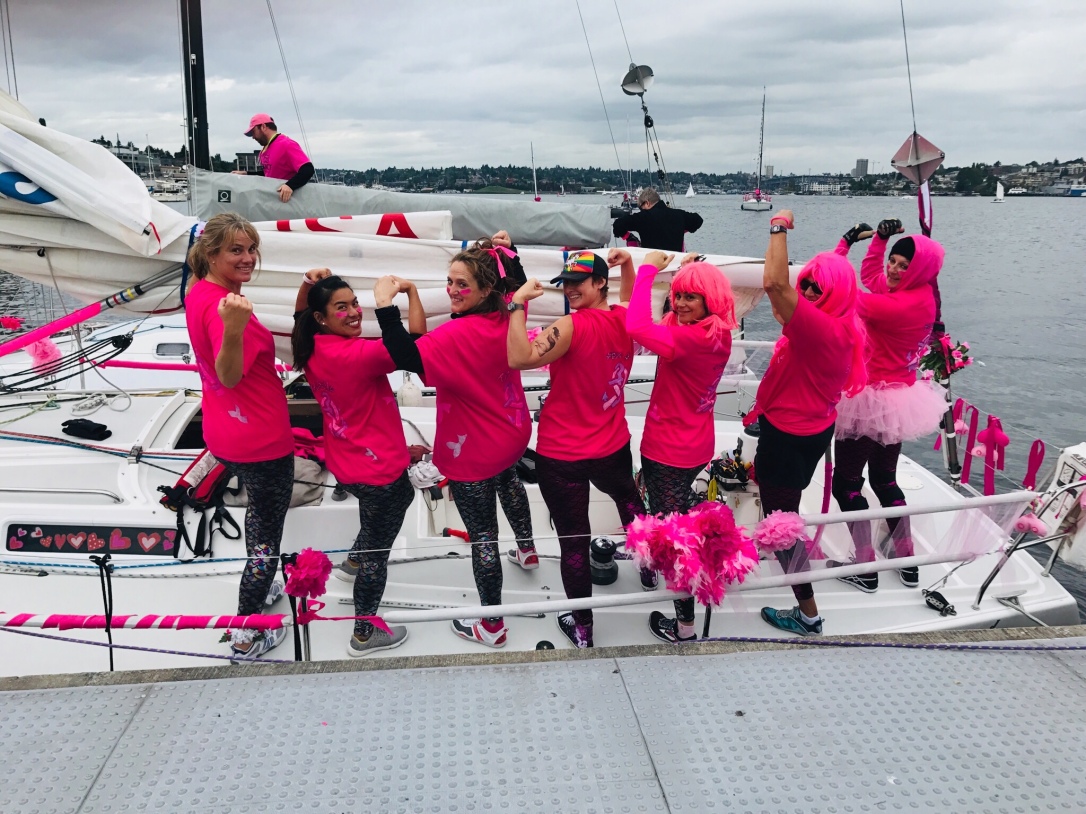 Pink Boat Regatta 2017 with the Sirens from J105 Puff…we took first place. It wasn’t cute: it was badass.

Like my previous post on Mansplaining and Hepeating, I will start this one with a shout out to men. Why? One: because I do love them and my intention here is to support them being better men around women. Two: because as a woman if you don’t do a positive shout out up front some people easily get offended and label you a man hater or bitch.

This proves another point that women have to do a lot of emotional labor to be heard. What I mean by emotional labor is that I have to start out by considering everyone else’s feelings before talking about my own. This is classic cultural responsibility we are taught as young girls: “Be nice.” As I’ve aged I like this one better: “Be kind, and be honest.”

This post is about checking your assumptions and thinking before you speak. Assumptions are often based on unconscious bias. We all make assumptions, even me. Bias is human. The real work is in being open to acknowledge bias, learn from it, and then try to repair and grow. This is how we will become more inclusive in the sport and create better diversity to grow the sport of sailing. It’s also just how we become kinder and better humans.

I went to a boat swap meet last spring and had a list of rigging hardware I needed. Turning blocks, winches, pulleys, shackles and cleats. I’m trying to rig Poopsie back so I can single hand her better. As I approached tables and was obviously looking at the gear the following happened over and over:

“I have some great pots and pans, dishes and galley stuff over here.”

I was dumbfounded. I thought maybe it was a joke the first time, or a gentle teasing, but these guys were genuinely making blatant assumptions that as a woman I would be interested in galley stuff alone. They were deliberately steering me away from $100 winches to tubs of $5 plastic plates.

In my irritation I wanted to curtsy and say with a coy smile and eyelash bat, “Oh! Thank you so much! Do you happen to have aprons and feather dusters back there too? I love to clean so…” (insert eye roll and gag reflex here) Instead I politely declined and made a solemn internal oath not to do business at that table. Money talks and they lost out with their bias assumptions. What could have been different? Ask me what I’m looking for like any other sailor. The ones who did got my money. Note: I hate cooking, I super love sailing.

This brings me to my own lover, Eric. At the same swap meet I got a bow roller, two small winches and a bunch of stuff I hadn’t talked over with him. I don’t need to, it’s my boat. As I showed him my stash and the deals I got he was genuinely surprised. With the enthusiasm you would show a retriever bringing you a ball he said, “Good girl! You did a good job! I am so impressed! I didn’t know you knew about bow rollers! This one is even new.” He meant well, I know that. Intention is also a big factor here. He also didn’t see how maybe those comments or his over enthusiasm could be insulting. It comes off even a little condescending. Let’s reverse to see how it would look the other way, which is a good exercise in self-checking.

Eric gets groceries. I say in a super chipper and even shocked voice, “Good job! Good boy! I am so impressed! I didn’t know you knew what olive oil is! This one is even organic extra virgin!” I’m pretty sure at the very least he can read labels. So, he is excited about my swap deals, what could he say differently? “So cool! Love it that you got such a deal! You really did a great job finding all the good stuff, where are you going to place the bow roller?”

Which leads to another part of over enthusiasm and bias: cute. If Eric makes a meal, it’s not cute. It’s being an adult. If I dock a boat, it’s not cute. It’s being a sailor. When I was in Ballard Cup running Puff, our all women sailing team, we got dozens of varying comments of, “cute!” Seriously, sometimes we felt like we were animals at the zoo with all the gawking we had on course. Men would pass in amazement or amusement, “Are you ALL girls?!” We are all sailors who happen to be women, yes. We would always smile and be friendly, knowing the intention was mostly good. We also were irritated, as most women are by this type of thing. We are running an $80K race boat on course, it is nice to be taken a little seriously.

For me, I found it especially cute when others were looking at our transom as we left them in our wake racing by. Sometimes I wanted to start yelling at boats, “You are really cute out there sailing! It’s so cute the way you have your sails trimmed! Are you all men?!”  Alas, I know that kind of thing is immature and wouldn’t have done anything but give us gals a moment of smug satisfaction. So lets try again for supportive boat cross talk. You could say: “Good race out there! Nice sail trim! You all are fast! This sure is good weather!” It’s not that cute isn’t all bad. You can say an outfit is cute, you can say a puppy is cute, you can tell me my unicorn farting a rainbow is cute. Just don’t tell me it’s cute that I sail a boat.

This leads me to the last bit, and something I sadly on occasion use to my advantage. Playing into sexism to get something in return. When we go boat shopping, to boat shows, to boat supply stores, salespeople almost always defer to Eric. I will be shopping for my boat and the assumption is always that it is his and he is the one dropping the cash. Big no-no. Eric is usually super good at correcting them, “It’s her boat, you should talk to her.” This is one of the many reasons I love him. He’s supportive of me and an advocate. How do I sometimes use sexism to my advantage?

I was at a boat show and a rep was hashing it out with Eric and completely doing the “little lady” thing with me. I decided to go with it and started playing dumb. This was early in our dating and Eric had no idea I would do something like this. He was so shocked he nearly spit out his gum when I said bubbly and demurely, “But how would I handle this big boat in bad weather? How would you even get the sails in? It looks so scary!” The sales rep ate it up though and gave us a bigger tour and more info, especially on the electric furlers. He loved my flirty submissive attention and puffed up explaining things. He often smiled at me and said, “it’s really technical.” I would smile back and say, “Wow! I had no idea it was so complicated!”

We left and Eric said, “I thought you were going to be mad at the way he was talking to you at first. So I was shocked you played dumb, but caught on to what you were doing. It worked because they never spend that much time with you at boat shows. I had no idea this kind of shit happens and men play into it so easily.” I said, “Ya, sometimes you can hide behind people’s projection of you. I mostly wanted to see how their battery banks and electrical panels were wired to support the load of the furlers.” Then we had a great talk about sexism and how pervasive it is and my beautiful white middle aged Texas man continued on his journey of being an ally. He’s a good guy!

It’s important to have understanding and kindness for bias, even when it is irritating. Our bias is handed to us through our culture, institutions, media, family, and our own experiences. Most of the time this bias is based on stereotypes that are unfair or untrue, or from lack of exposure or awareness. The antidote is education and looking at our intentions and communicating differently. A lot of times it is just good to try to put yourself in the other persons shoes to see how it sounds.

Overall, why is it important to check your bias and look at assumptions? Because you miss out on meeting a person as they are instead of your internal profile of them based on appearance. You can also miss out on things you are working for: like business deals. You also can inadvertently offend or insult someone, like Eric did with me at the swap meet. In worst case scenarios, you just come off as an ass or asshole. I write some seriousness of objectification, another kind of bias in my next blog. May you think before you speak and may we all sail in peace.

1 thought on “Assumptions Make an Ass of You: An Enlightened Mans Guide to Sailing with Women Part 2”