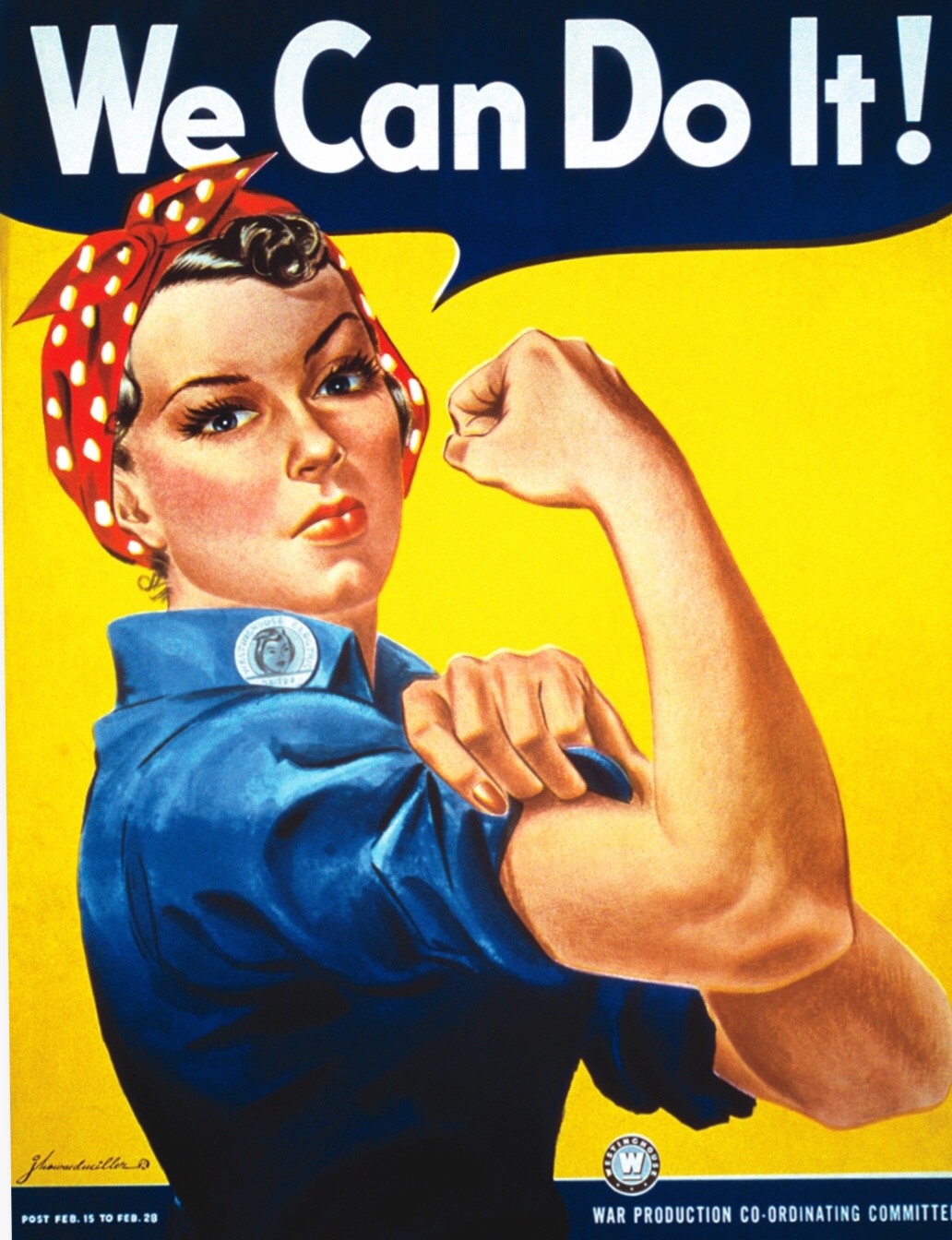 MacGyver, Renaissance Man, Maverick, and Jack of All Trades there are so many terms for men who are ingenious, savvy, bold, inventive and quick on their feet in a crisis to save the day. What about women? We need a new catch phrase for badass women who roll in with a paper clip, a toothbrush and some gum to rig a time machine and save the world. Because that shit happens all the time people, watch a mom with three kids any day and you will know what I am talking about.

Ultimately we need non binary terms for everything. That kind of language would be helpful in equalizing our concepts of people. Your sexual organs or gender identity have little to do with your performance in problem solving and ingenuity. Your brain does, and everyone has one of those. Of course they function to varying degrees and in many different ways. Nonetheless, for those who identify as a woman, it would be nice to have a quick witty term to go with quick witty problem solving. Something that conjures up the image of a woman there to save the day.

I have been reading over at Women Who Sail, which is for sure one of the best online sailing groups out there. I read posts in many sailing forums and by far this group has the most information and diverse resources. It’s also kind and supportive, they keep a close eye on being an emotionally safe space where negativity is discouraged. I read posts and stories of women using the most amazing things to cope in crazy situations and have permission to share some here.

A woman used a bobby pin she was wearing to get home when a pin in her outboard fell out. One woman connected a wind vane and emergency tiller with the big three: a vice grip, cable clamp and duct tape to get through a long passage. Clothes pins were used to hold the light bulb for the engine starting circuit. A crown royal bag and canned goods were rigged up as ballast on a halyard to swing it over the spreaders after getting caught up. Genius move goes to the woman who used astroglide sex lube to get a hose connection to slide on. Buckets trailing the boat and windsurfing were the solution home after the rudder fell off for one sailor. Other women used crochet hooks to unjam cleats, dinghy inflators and air horns to unclog engine water intake, Pilates bands to secure a leak when the motor mounts failed, an oatmeal can and JB Weld to fix a cracked radiator. I myself have used feminine hygiene products like pads and tampons in various situations for leaks on the boat.

No matter woman, man or queer: sailor is a word for all of the above examples. You have to be resourceful if you are on the water any distance from shore. But even this term conjures up a man at first glance. All words have associations, image and bias that comes with them. What I wonder is if we can find one for people who identify as a woman? Like sailor, I think the label woman encapsulates a lot of diverse roles and abilities as historically we have juggled many tasks domestic and worldly to survive. It would be great if that label was seen as someone resourceful, clever, strong and able to do anything. Unfortunately it is not by most standards…..yet. For many, the image with woman still conjures up more traditional domestic roles and being someone who needs protecting and helping.

So, here are some proposals of words for women who are masters of much:

She totally pulled a Curie? I mean, this lady was a badass, she won two nobel peace prizes, figured out radioactivity and helped form Atomic Theory. The issue is few have heard of her, thanks patriarchy!

She fixed that rig like an RBG? Ruth Bader Ginsburg is the badass of justice, she works out in her 80’s and is fierce in the courtroom. But how technically handy is RBG?

She did that passage like a Dame Naomi Christine James? Maybe we need a sailing woman to represent? The first woman to sail the world solo via Cape Horn and second solo, is a good start. But how to abbreviate?

Will television finally come up with a female version of MacGyver and women will be called a Keser when they save the day? I have heard that this kind of show might be in the works. It would be nice to have a pop culture representative. This depends on if the show is produced or hits it big.

She is a total Wonder Woman: We just have too few icons for powerful women. I love wonder woman but can never quite relate to her because I could never wear the outfit. Too sexualized for my taste. I would take the lasso though.

I saw her fix that spinnaker set up like a Rosie? Everyone knows the iconic Rosie the Riveter. She is an indenpendent woman who takes on whatever she needs to and gets it done. Since it also makes me think of a flower, is this powerful enough?

I’ve seen her work that engine like a Minerva? Minerva was a handy goddess in her day and made things run smoothly, but it just lacks current day umph. Although it does bring up Professor McGonagall for us Harry Potter fans, and she is pretty amazing.

She’s got a tool box like a Maven? This one is good as it denotes expertise, wisdom and understanding, but lacks the action and adventure piece somehow. She’s a total maven sounds sexy though.

She works that boat like a Badass? I have seen Alexandria Ocasio Cortez and some of the new women congress take on this label recently and I love it. It’s so empowering to see women own it and show it off. It is the one I currently use the most, but I know some people don’t like the swearing.

She’s a Powerhouse? This is a neutral one that represents the versatility and power exuded by a handy woman. My mom would like it because it doesn’t have any profanity. It also makes me think of a building or structure and we need something more curvy.

Nobody trouble shoots the electrical like the Git-er-done-Queen: I like this one because it is owning a phrase that encapsulates being able to handle anything. Git-Er-done has also been used in reference to getting a woman off and I like that, orgasms are cool. Adding the tile Queen to it makes me think of power and a regal class to whatever we are doing. It demands respect and is feminine.

Technical Goddess, Lady Boss, Amazeballs Super Star, Mary Poppins, Mother of Invention? So many options. Are their terms out there I’m missing?

We could just go with polymath, genius, capable, wise or any synonym that belongs in this super smart and savvy category. It just lacks the visuals to go with it. Even when we want to flatter someone in this area we might call them Einstein. Like there have never been smart women to fit that image! I mean, didn’t everyone see the movie Hidden Figures? Go see that movie!

I was hoping this post could have more participation. I’ve been sitting on it for a while trying to come up with the best term and am still at a loss. Badass and Git-er-done-Queen are my favorites. Either vote for your favorites in this list or add your own with reasoning to them in the blog comments below. Lets see if we can come up with a new term for all the badass ladies out there gittin-er-done on the daily!!

6 thoughts on “MacGyver, Maverick, Renaissance Man and Jack of All Trades: The New Female Term for Being Ingenious”